For the novice it can be difficult to distinguish the different karate styles. However, some technical and historical differences when you look closely. It can almost be compared with the dialects of the same language.

Shuri-ryu system is a hybrid of Shuri Shuri-te and Chinese Hsing-Yi. It is reflected in the strong circular motions, the great emphasis on hand techniques, and the use of the 12 animal shape.

Kata Gopei Sho Dan Enn Sho is unique and is not found in other systems. These two kata is precisely characterized by very circular motions and many expensive molds.

Another big difference in Shuri-ryu and other more Japanese-style karate styles are Shuri-fist. When attached hand is stretched index finger distal interphalangeal joint.

The syllabus is vast and covers many techniques and kata, but also anatomy, physiology, manipulation of meridians, breathing techniques and traditional weapons.

The history of karate

The Basics of karate started about about 500 years ef. kr. where Bodhi-Dharma (one budistisk monk) went from India to China to spread Zen Buddhism. He ended up in Honan province, where Shorin-ji (Shaolin) -klosteret located.

Bodhi-Dharma wanted to teach the monks in the monastery, but they were in such bad physical shape that Bodhi-Dharma had to get them in good shape, so that they could learn about Zen.

The 18 exercises also made possible for the monks to defend themselves against often exhausted attacks by robbers.

The 18 exercises were popular among the monks and was later to 170 exercises that formed the basis of Chinese Kempo. The exercises were made by monks studied various animals and used their defense and angrebsbevægleser.

The movements from the many animal was later (13th century) are grouped into 5 groups. Then develop dated it to many different styles in China. From China widespread kampsystermerne to Korea, Okinawa and Japan.

In the 1400s, were issued weapons ban on Okinawa, which put much time into it to defend itself with hands and feet. This development mixed with Chinese Kempo resulted in Okinawa-te, who are developing our on to different combat systems, for example. Shuri-te and Naha-te. 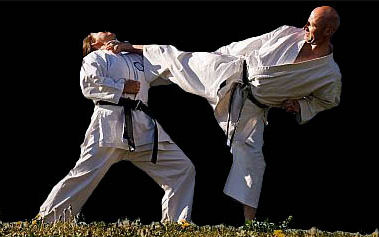