Øresundsakvariet (part of the University of Copenhagen) is a saltwater aquarium and a videnspædagoisk center for the marine environment with experiences and inspiration to all!

Øresundsakvariet is a local, small saltwater aquarium, which is close to the Sound and the northern port of Elsinore. During a visit to the aquarium gives insight into the amazing and most people completely unknown world which unfolds at the bottom of the Danish seas and fjords.

Øresundsakvariet is part of Copenhagen University museums and simultaneously a saltwater aquarium (zoo plant) and a videnpædagoisk center for the marine environment with experiences and inspiration to all!

About aquarium generally
Øresundsakvariet is a local, small saltwater aquarium, which is close to the Sound and the northern port of Elsinore. During a visit to the aquarium gives insight into the amazing and most people completely unknown world which unfolds at the bottom of the Danish seas and fjords. Øresundsakvariet the 2005/2006 undergone the greatest expansion and renovation since the aquarium opened in 1973 and is thus in some areas significantly improved. Blue. is built brand new modern filtration systems for aquarium water that gives Denmark's cleanest water!

1) Biotopakvarier
The layout of the exhibition is made up of biotopakvarierne that are reconstructions of 15 different base sites or habitats in the Sound and Kattegat, such that in this series of tanks moving from the sandy bottom in the very shallow water (15 cm) of sea grass and reef down to the mud bottom on 35 meters deep and at times over cliffs and wrecks for a slice of Helsingor Nordhavn at 4 meters depth.

2) Theme Aquariums
In addition, a number of themed aquariums, ie smaller aquariums
small animals, which are often overlooked in the larger aquariums, or whose behavior is particularly interesting. Here, there is a degree of substitution of animals so as to include is possible to see interesting periods in each animal's life cycle. Theme wall has been modernized in spring 2000 and has thus been twice as many aquariums as well as a completely new designed jellyfish aquarium.

3) Stir basins
Last but not least there is the entrance located a large children's touch pool that meets 3 different heights of the children (and adults!) And where it is allowed to touch some of the animals has been seen in aquariums example. sea ​​anemones, sea urchins, crabs, various fish, etc. (PS! REMEMBER DOG IN THE INTERESTS OF ANIMALS NOT TAKE THEM OUT OF THE WATER!) in the exhibition entrance is finally placed a combined grow stir pool / biotopakvarium (The bubbling reefs in the Kattegat) where, by means of an adult can touch sømrokkernes noses electricity. rødhajens fun skin.

Our custodians / biology guides are trained havbiologistuderende and fish assistant students who can tell a lot about the different sea creatures in the aquarium. 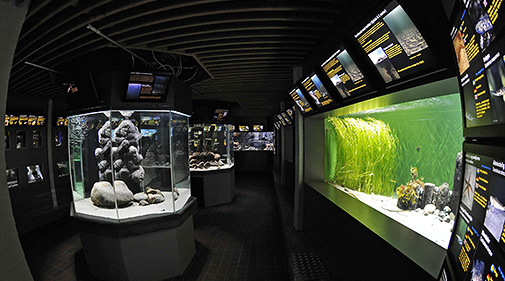 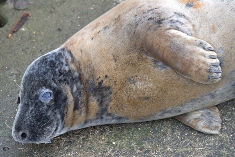