Want to be trained actor Acting at Aarhus Theatre, so does the training 4 years and have equal emphasis on theory and practice.

Being an actor requires something special to the individual - education is compulsory and takes up about 40 hours a week. Evenings and weekends could be involved in teaching. It is not possible to have another job during training.

There are many who dream of becoming an actress, often because they think it is the same as an exciting and exotic life as a familiar, perhaps even rich and famous person.
And it is a special existence, even if it's in a different way than most people imagine. The subject requires talent, yes, but it also requires a solid actor craft. Talent can not be taught, but craftsmanship can, and it's the opportunity to get through an actor training. This is also where you find the most exciting thing about being an actor, that's the work that an actor does.

On the following pages you can read about what an actor training is about entrance examinations and the training's goals and progress. And if you after reading feel like work and still dream of becoming an actress, so persecute your dream!

GOAL
The school's goal is to establish a modern educational program that reconciles a number of classic demands on the actor's art and relate openly against the continual emergence of new forms of performing arts and related arts.

STARTING POINT
All teaching is based on the individual student's own assumptions: body, voice, imagination and creativity. Meanwhile, all teaching that goal through a long, continuous work to give the student the opportunity to meet the requirements that have to be made a skilled actor: dramatic / express terms, bodily, voice and speech purposes. Emphasis is also placed on students through training develops a personal and flexible working which enables them to work in different genres and styles, and able to adapt to different working methods and forms of theater.

PROGRESS
The program is 4 years, the school year extends from mid-August to mid-June.

1ST AND 2ND YEAR IS THE BASE YEAR.
In the first years, teaching primarily aimed at opening and sharpen the senses, to increase knowledge of the personal artistic potential and increased attention to the outside world. The training also introduces a series actress technical key concepts and coach ability to put them into practice.
In the second year increased the technical challenges like the text used material is more demanding than 1. They also work with dramatic projects in ensembles with students from 3 years and taught in various acting techniques and methods.

3. YEAR IS PRAKTIKÅR
Internship mainly takes place at Aarhus Theatre; in a few cases at other theaters. They also work with dramatic projects in ensembles with students from the second year.

4. YEAR IS leaving school
Here rehearsed two fully professional productions: a presentation spectacle and a graduation performance. They played both at Aarhus Theatre, and if possible in Copenhagen. In the program's last period works graduating students with individual projects.

EDUCATION EXTENT
teaching recordis just over 40 hours per week. Evenings and weekends could be involved in teaching. It is not possible to have another job during training. Any public performances can only take place outside school hours.

ECONOMY
The program is free. Students can receive grants and loans from the State Education bluefin applicable rules ..

CONDUCT Attendance & PERSONAL REQUIREMENTS
All teaching is mandatory and is present duty. We also makes note that this training is highly personalized demanding. It is a necessity and a prerequisite that the students admitted to the school is willing to invest themselves fully in all contexts.

What is an actor training?

For many people, an actor learning something of a mystification. What is going on? What do they do? And why does it take so long? For us who work here, education is not at all mysterious, but we teach some subjects and in a way not found many other places, and I will try to put some words on what it is.

The program lasts four years and for most, the four year a very important chapter of their lives. Not only because you get the paper that you are professionally trained actor, but because education itself often brought to bear on one's self-perception, perception of others, even one's whole attitude to life.

If, for example, always goes with the shoulders up around your ears so requires training for an actor that you learn not to, at least on stage. It takes time and is not as easy as it may initially sound, the habit of walking with his shoulders up around his ears are developed over many years and has become part of the perception of who you are.
But if you learn not to, then all the roles people will play, having shoulders up around his ears, and it is far from certain that it is a true expression of all the people, you have to produce. The locked posture prevent people freely and consciously choose different postures for different roles. The same can be said about the way of speaking, private reaction patterns and stereotypes, and an actor training therefore consists of unlearning and learning, both physically and mentally, and integrates in the way the acquisition of an artistic craft and personal development.

However, it is not that one is another to go on an acting school. If anything is perhaps a little more themselves. But when you want to produce other on a stage, you have to learn openly and without prejudice to quiet his mind and body, thought and feeling, hearing and vision, imagination and memory, intuition and intellect available; both for the person you have to produce, for the other actors on stage and for them to play for the audience.

At the same time one must consciously train his ability to be present, to be fully present in the moment and to react spontaneously. It is crucial to what is going on in the play, actually happening on stage and happens to credibility; even if the show is carefully rehearsed and perhaps has been played many times.

And not least, one must practice how to tell stories about human life, give them dramatic form and play them for an audience, whether it is done directly in a theater or on a street corner, or indirectly through a camera or a microphone. For the actor is his own instrument and you have to learn to play on free and unconstrained, like the violinist's violin. More mysterious is not. And yet. For an acting school is a special place, a paradoxical mix of tradition-conscious institution and artistic keg, a hothouse for new ideas and other ways of thinking than a traditional theater view offers.

This is where the future begins through a steady stream of well-educated young, wayward actors who can and will bring renewal with him, and there is something strange by helping to prepare the way for something you do not know what is. That something comes into view, you could not even imagine. And it is mysterious. Genuine mysterious.

Videos from Acting at Aarhus Teater

Halls at the Aarhus Theatre 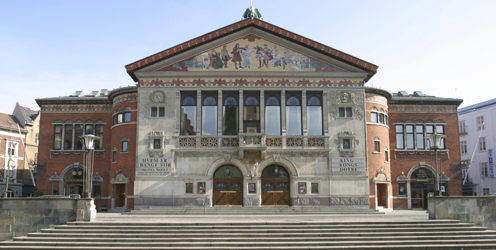 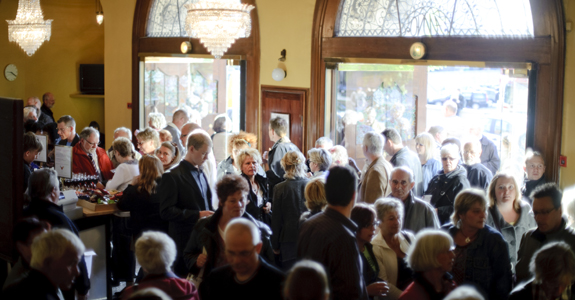