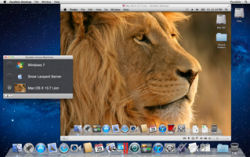 Parallels for Mac - Gold worth for Mac users!

If you are one of the many with a Macbook, so this is probably a very interesting news for you. Everyone can agree on that Mac's look fatter than PCs and things like start-up and functions are much better. But most also miss some Windows programs and Windows generally after switching to Mac.

This need no longer be a problem. The company Parallels has namely developed a program, also called Parallels that solves this problem. With Parallels You can actually run Windows alongside Mac OS on your Mac. In other words, you get the full advantage of both Mac and PC at once. And all the Windows programs you might have paid for can now be used on your Mac. Studenterguiden.dk tested Parallels on a Macbook, and it works perfectly. Windows programs run smoothly and actually as fast and well as the Mac software that was installed. With that in mind, you can save a lot of money on programs, while programs for Mac is often more expensive than the PC. A good example is Microsoft Office, which for Mac will cost several hundred kronor more than the PC. Parallels for Mac is free to try for a fortnight. If you then still want the program, it will cost you $ 79.99, but the money is in our opinion, money well spent. You can download a free trial of Parallels for Mac and read more about the program at parallels-danmark.dk