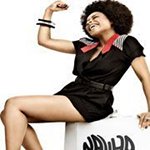 Nabiha at Posten in Odense

Finally Odense gets the opportunity to experience the popular singer Nabiha when she Friday, February 18 comes to Odense.

Nabiha who have ancestry in the Gambia, Mali and Morocco was born and raised in Copenhagen. She has recently had a significant role in the Danish music scene and has become known on tracks like Deep Sleep "and" Crack "and has just released her debut album of the same name. Nabiha is a fantastic singer who in 2010 had a busy schedule, with concerts at festivals such as Spot and Skanderborg, not least with a concert in Tivoli. But it is not only in Denmark to have been aware of her catchy music, also in Germany, fans fell for her happy music. Nabiha has an ability to elegantly blending pop, soul, electric music and ethnic elements reminiscent of some of the most popular singers like Duffy and Amy Winehouse. It costs 80 kr. For members to come in, 120 kr. In presale, 140 kr. In doorstep selling.