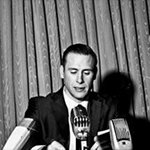 LOC on Amfiscenen in Odense

Friday, June 3, you get to experience, probably one of the most talented artists; LOC He will namely on the occasion of the release of his new album libertine, take a trip around Denmark, and gives concerts at clubs and concert venues.

Thus, he this day, appearing on Amfiscenen by Brandts pm. 20, and thus it would be the first LOC concert in the Funen. The album is the rapper's fifth solo album and has been received by storm. The rapper has once again proved why he is so popular and has already hit in radios and clubs with the hit "torque". So get ready for a treat at Brandt! It costs 295 kr. To get your hands on a ticket for tonight's concert.