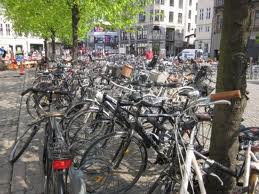 Mapping of Copenhageners cycling habits to develop the city

Cyclist behavior and route choices are examined with GPS monitoring of 210 cyclists in Copenhagen. The goal is to create better conditions so that more people choose the bicycle over the car.

GPS data from ordinary everyday cyclists bike tours offer a brand new knowledge that can be used to promote cycling in Denmark and the rest of the world. Therefore, over 3000 locals in recent months participated in a survey, and of these 210 selected to wear a GPS one week. In comparison with similar projects elsewhere in the world, the Danish study very extensive, both in terms of number of participants and volume of data gathered. Researchers at Aalborg University and the University of Copenhagen helps municipalities to equip the cities so that they support the needs of cyclists. With the latest GPS technology maps the two universities cyclist behavior to learn about cyclists' behavior and their motivations for route selection. The goal is to explain what effects changes of streets, roads, intersections and squares of the city will have on cycling infrastructure and cycling choice of routes, so you can eventually create better conditions for the many cyclists in both the capital and other cities. With accurate maps of cyclists' whereabouts can better assess the qualities of the existing urban space. Therefore, GPS analysis a unique opportunity for an easier, more targeted and more effective action to cycling, so you can improve cycling conditions and thereby facilitate the choice of the bike as means of transport, explains Associate Professor Henrik Harder from Aalborg University, which emphasizes that a GPS survey of this size is unique in an international context. The project Bikeability is one of the new ideas on how, among other dynamic mapping of urban environments can provide new knowledge. Bikeability is a collaboration between universities in both Denmark and the Netherlands. Forest & Landscape, University of Copenhagen conducted the survey, which has selected 210 participants, each must wear a GPS on their cycling through a whole week. The study also provides insights that can be used to give a picture of various cycling types and their particular behavior. According to senior researcher Hans Skov-Petersen this knowledge term used for better cycle routes, environmentally friendly solutions, mobile apps and more targeted to the individual cyklisttypers needs. The technical part of the study and preparation of data handled by researchers at Aalborg University, which is among the world leaders in the use of surveillance technologies in urban planning projects. The participants' choice of cycle routes recorded and their movements gather in electronic maps. The so-called flow map illustrates each participant's bike trail through the streets of Copenhagen and will thus reflect cyclist conditions in the city. The following analysis at the University can show the parameters that determine the route selection and analysis can provide a clear picture of cyclists' concerns and needs. SOURCE: AAU.dk