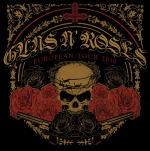 On June 14, gives the famous hard rock band Guns N Roses concert in Gigantium in Aalborg, so now it is nearing time to secure a ticket.

The concert will be the only one in Denmark at the ongoing "Chinese Democracy World Tour". In December last year took the band gap of the tour, which follows on from the band's latest album "Chinese Democracy" which immediately came in first place on the charts in no less than thirteen countries since it was released in 2008. The band has for many years been a recognized band that has gained fans worldwide. The band consists of members Axl Rose, Frank Ferrer, Tommy Stinson, Richard Fortus, Ron "Bumblefoot " Thal, Dizzy Reed, Chris Pitman and not least the new guitarist Dj Ashba. Last band was at the World Tour was in 2006-2007, when they gave 60 concerts in 26 countries, including in Denmark at the Roskilde Festival. The concert is a ståkoncert.