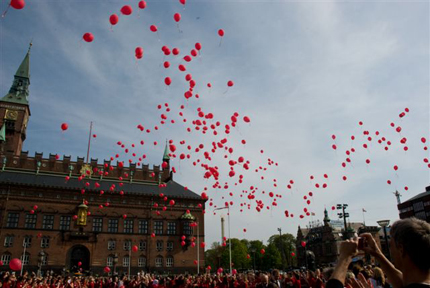 The campaign White Zone should encourage more people to apply for training to be a nurse, laboratory technician and radiography. 28 April, it started with speeches, music and lots of experiences on City Hall Square in Copenhagen.

More nurses, radiographers and laboratory technicians. The aim of the campaign White Zone, which was launched at City Hall Square in Copenhagen on April 28. Several hundred students from the three courses was the afternoon turned up as ambassadors, stood in a large cross, the campaign's logo and slap each a balloon to mark the launch. The sun was shining from the Copenhagen sky, and created the best framework for today's program. The campaign launched by the Ministry of Education, Danish Regions, Local Government Denmark, the Ministry of Health, the Danish Nurses, Danish Bioanalysts, the Association of Radiographers in Denmark and Profession Rektorkollegium together. President of the Danish Nurses, Connie Kruckow, Education Minister Bertel Haarder, chairman of the Danish regions Bent Hansen and Health Minister Jacob Axel Nielsen kept talking. "We have for years talked about that enough of labor shortages, because we all know the composition of our staff. Now we are in the middle of it. Therefore, a national, common approach is needed and I am pleased that the parties have come together both on the organization, but also nationally and regionally, "said Bent Hansen. Afterwards measured student visitor blood pressure or ultrasound scan them in a oplevelseslazaretet, while others walked down the pedestrian shopping streets and shared flyers and balloons out to interested. The singer Tue West put the musical frame with a concert and the day ended with a performance of two students in the Evening show at Radio Denmark. In many cities across the country, the campaign was launched with similar events on a smaller scale. Source: Ministry of Education