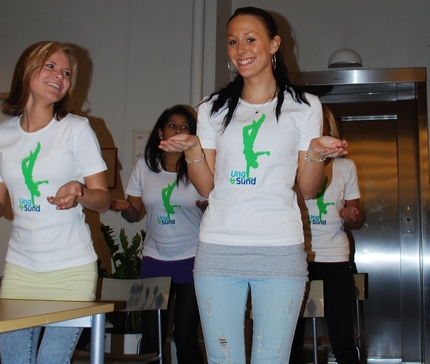 Use breaks for exercise

The mayor, minister, teachers and students got a sweat as the City of Copenhagen launched the exercise book "Move On ". The book aims to inspire students and teachers on the municipality's commercial and production schools to small exercise breaks

It was really supposed that only students from a variety of commercial and production schools, should illustrate the exercises in the exercise book "Move On" at the launch at Niels Brock in Copenhagen on Friday 23 October 2009. However, both the City of Copenhagen's health and care mayor Mogens Lønborg and Education Minister Bertel Haarder took eagerly part in the exercises.

The Minister went on hands

Education Minister Bertel Haarder gave a speech at today's launch. And he had an addition to the exercises in the exercise book: "It is some good exercises with the exercise book, but there is one I forgot," said Bertel Haarder, after which he for meeting surprise demonstrated that he can go on hands. "Exercise book is a great initiative that will help to change the perception of exercise and health in vocational schools. For as we have seen today, you certainly do not have to be boring exercise. I hope that other municipalities and schools will be inspired by the Copenhagen initiatives, "concluded the Minister of Education.

Copenhagen has developed Move On as part of the social reserve project "Young and Healthy in Education", which is a public health project targeting students in secondary schools in the municipality.