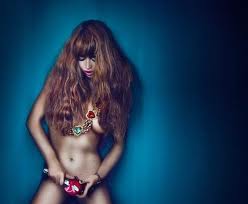 Aura of the Train, julegaveidè?

If you need a great gift for someone you love? Then there was a ticket to the concert with Aura perhaps a idè .... They cost 180 kr. And the concert will be held d. March 13 at Train.

After 3 years of hard work with touring, songwriting and productions abroad is one of the most successful solo artists Aura ready with his second album "Before The Dinosaurs". Thoughtful lyrics and at once ethereal and present vocals. But there is indeed something to live up to. With "Before The Dinosaurs" show Aura once again how unique she is. The plate is filled with what Aura himself calls "progressive pop-poetry"; catchy pop and surprising beats. The debut album "Columbine" from 2008, sold gold in Denmark and more than 100,000 ex. internationally. The singles have been "Something From Nothing," "Song For Sophie" and especially "I Will Love You Monday (365)" that in Germany alone has sold more than 500,000 ex. The number also went top 10 in Austria, Switzerland and Poland. Aura was the 2009 Danish Music Awards female scorer with prices for both "Year Female Artist" and "Year Pop Release". See more and order tickets here